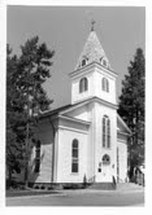 The First Presbyterian Church was officially organized as the "Presbyterian Church of Gull Prairie" on October 16, 1831, with 17 members. The church served both Presbyterians and Congregationalists.  The first church structure was built on the present site in 1837. The present sanctuary was completed in 1861. In 1981, during the celebration of our church's sesquicentennial, a new pipe organ was added, as well as a new wing with kitchen and classroom facilities. Our church was designated as a Michigan historical site that same year. In 2002 another addition of offices, classrooms and storage rooms were added to the church. 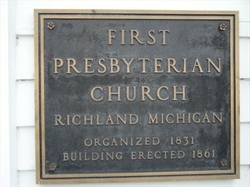 1831 - THE FOUNDING OF THE CHURCH
In May, 1830, a group of 24 persons arrived in "Gull Prairie" (now Richland), as part of the "Kalamazoo Emigration Society of Michigan." Before leaving Hudson, Ohio, at the start of their journey, these pioneers entered into a stern religious compact with one another in which they adopted the following resolution:
...(3) Christian principles, and the injunctions of the Gospel shall be adhered to generally, and as soon as a sufficient number of professing Christians shall have emigrated, a Congregational Church shall be organized and a Gospel Minister procured and supported. (4) Common and Sabbath Schools shall early be established and supported; and if circumstances seem to require it, an Academical Institution. (5) The use of ardent spirits, either directly or indirectly, shall not be allowed by this society, except as medicine. (6) Those desirous of moving to Kalamazoo, having the good of their posterity, and the community in general, at heart, being willing to assist and alleviate a fellow citizen to the rules of Christian morality and temperance, as specified above, will receive the encouragement and support of this Society.
On the day after their arrival, a Sunday, they gathered together to worship, to sing the songs of the church, to read the Bible, and to bow in prayer. A marker in the park of the Village Square of Richland commemorates the event:  This tablet commemorates the first religious service held in Kalamazoo County. It was conducted by John Barnes and Seldon Norton in May, 1830, under an oak one and one-half miles southeast of Richland Village.  It is said that friendly Indians, the Potawatomi, who were encamped nearby, gathered around and observed.
In that first year a Sabbath School was organized, the first of its kind in Michigan west of Ann Arbor.  During the autumn and winter of 1830, it met in the small log house of John B. Barnes, with Orville Barnes as superintendent and teacher; in 1831, it moved to the cabin of Cornelius Northrop. Religious services were then held each Sunday in the various log homes of the settlers, the services being informal and generally led by laymen.
On October 14, 1831, in the log cabin of Cornelius and Mary Northrop, a meeting was called for the purpose of organizing a church. The minutes of that meeting are still preserved, in faded brown ink of fine handwriting, in the original minute book among the treasures of this church. Moderating the meeting was an ordained Presbyterian minister, the Reverend Luther Humphrey of the Edwardsburg Presbyterian Church, representing the Presbytery of Detroit. Clerking the meeting was the Reverend William Jones of the Presbyterian Church of White Pigeon.
Though the Emigration Society's compact had directed that "a Congregational Church shall be organized," it turned out that those concerned with the new organization were equally divided in their preference for a Presbyterian Church or a Congregational Church, and, when a vote was taken on which church was to be established, a tie vote resulted. The tie was broken by the moderator casting his vote with the Presbyterians.
It should be noted that as early as 1801 there had been a national ecumenical movement between the Presbyterians and the Congregationalists. The General Assembly of the Presbyterian Church and the Connecticut Association of Congregational Churches had, by a "Plan of Union," agreed to encourage their adherents to cooperate on the new frontier with compromises in church organization that would avoid unnecessary conflict and duplication of congregations and buildings. Those thus joined together were called by some "Presbygationalists."  Such a joint church was organized in Kalamazoo in 1835.
The Richland church was officially constituted on Sunday morning, October 16, 1831, as the "Presbyterian Church of Gull Prairie," with 17 members. Two children were baptized and the Lord's Supper was celebrated. Outside the Detroit area, there were now four organized Presbyterian churches, including Edwardsburg, White Pigeon, and Mackinac, of which the Richland church quickly became the largest. The record shows that, on May 16, 1834, 50 new members were received, making a total of 95 since its founding.


THE EARLY YEARS
The record reveals that there were frequent disputes in the new church, many arising from differences between the two denominations of the membership, and many having to be resolved before the Kalamazoo Presbytery. In 1836, the Congregationalists identified themselves in a separate church organization and evidently planned to build a separate church. However, shortly after the first Presbyterian church building was erected in 1837, the Congregationalists continued to worship in it and dropped their separatist plans.
On November 30, 1837, the first church building erected on the site of the present church was dedicated. The Reverend Calvin Clark participated in that dedication and, in 1838, was called to be the church's first resident pastor. He proved to have gifts of diplomacy and succeeded in holding the two factions of the church together through a formal adoption of the Plan of Union.
According to the minute book, the church Elders were officially scrupulous about deportment of all members. It is reported that the Session summoned members to explain the use of "ardent spirits" for non-medicinal purposes, and for other unseemly behavior, such as that of one female member who had been observed "night-walking with a suspicious character", and one male member who so forgot himself as to sell tickets for a ball, and, what was worse, sold them on the Sabbath.


1861 - THE CHURCH BUILDING
In 1861, just when the Civil War was beginning, the present building was completed. With an exterior reflecting the New England antecedents of the first settlers, it was built by William Doolittle and Stephen Patrick from virgin white pine provided from the property of the grandfather of Roy Nichols (an over 50 year member of this church and long-time clerk of the board of session), on the west side of Gull Lake. A drawing circa 1875 shows it to have originally boasted a Christopher Wren-type steeple, higher and more ornate than the present steeple. The February 22, 1861 edition of the Kalamazoo Gazette provided a detailed description of the building, as follows:
...The new church edifice is built of wood, 48 x 72 feet, with a tower 130 feet high to be furnished with a Meneely bell weighing nine hundred pounds. Two of Robinson's furnaces are in the basement.
The interior plan is in modern style, pulpit in the rear, gallery in front across the whole width of the house, with recess for organ. There are seventy slips (pews) upon the ground floor, and five extra slips in the orchestra (balcony). Each seat will amply accommodate six persons, and, if necessary, seven; making capacity of seats five hundred, or thereabouts. (people must have been much smaller in those days!)
The seats are all cushioned in moreen; the pulpit decorations are of crimson silk velvet; pulpit carpeted with Brussel's carpeting; aisles with Ingrain; hair seat sofa for pulpit; and sofa chairs, marble top chancel table, kerosene chandelier of six burners, and side light. Cost of building, $7,000.
....The trimmings and furniture were mostly obtained by the ladies of the society, being proceeds of their sewing society and "sociables." Much emulation and spirit has been manifested on their part, and the ladies certainly deserve much commendation for their persevering efforts.
Dedication of the church occurred on February 27, 1861, and is reported the the Gazette for March 8, as follows:
....The new Presbyterian church edifice, at Richland, was dedicated on Wednesday, the 27th ult. The day was fine, and at an early hour the citizens of the place, together with a large number of  people from the adjoining towns, began to throng into the church, until it was filled to its utmost capacity. There were probably from six to seven hundred people present...
The exercises were:
Singing by the choir - "Blessed be Thou Lord God of Israel"
Invocation and reading of Scriptures - Rev. Mr. Gaston
Hymn - Rev. T. Jones
Singing - Choir
Dedicatory discourse - Rev. W.S. Huggins, Kalamazoo Presbyterian Church
Prayer - Rev. M. Bradley
Singing, choir - "He hath not dealt so with any people"
Benediction - Rev. Mr. Smalley
The services throughout were very impressive and interesting. Mr. Huggins' sermon was replete with sound practical instruction, and elicited marked and universal attention. The singing by the choir was also excellent.
The slips were to be offered for sale on Monday, the 4th inst. (Note: the pews were "rented" to families at an annual auction, some going for as much as $125 per year!)
The old church building had been sold for $300 to the Wesleyan Methodists of Richland, who moved it to "the east side of the green", where it was used as a church for a few years, later as a hardware store and finally the office of the Richland Lumber Company (where the Richland Home Center currently has it's lumber yard)
Sometime after 1861 a "chapel" was added at the rear of the building with a seating capacity of 100-150. Because it was readily heated with a stove, it was used in preference to the church in cold weather.


INTERIM YEARS
In 1880, a new pulpit was installed and dedicated.
In 1881, the bell, which had been moved from the 1837 church in 1861, developed a crack and was replaced with a new bell, still ringing for the Village to hear.
In 1886, the steeple was condemned as unsafe and was replaced with a lower steeple of less ornate design, presently in use.
The post-bellum prosperity of Milton Bradley's pastorate was not to continue always. Local records are almost all missing for two decades as the 19th century passed into the 20th. Membership declined and at times the financial situation was desperate. In 1900, there were but 113 members on the roll. For more than a decade after 1912, the congregation could not afford a settled pastor.
In 1923, the Reverend Leason Sharpe was called from London, where he had been a parish assistant in the slums. He was well- liked in Richland and served a term of three years before moving to a sister church in Hastings.
During the Great Depression of the '30's, Richland suffered along with the rest of the world. At the congregation's annual meeting in 1933, the then pastor, the Reverend Edward V. Belles, had to bolster the sagging morale of his little flock with these worlds: "There is an epidemic of fear. For churches to close now is like closing hospitals in an epidemic of disease." During this period, financial records show that stewardship canvassers came back with less than $300 in pledges. But the church stayed open and, like many of his hard-pressed parishioners, the pastor carried on with his salary unpaid.
Beginning about 1950, when there were 113 members - the same as in 1900 - there was a revival of church interest and a steady growth in membership. Several expansions took place in this period. In 1952, the "cottage" (manse) west of the church was built, at a cost of $9,000. Later it was used for church school classrooms. In 1957 it became (and still is) The Richland Jack and Jill Preschool, Inc., a weekday community preschool.
In 1953, the church interior was remodeled and redecorated, converting to a chancel-style sanctuary following plans of the Building Improvement Committee, Wm. McCandless chairman and Roy Nichols treasurer, assisted by the women's group headed by Caroline Grettum and Midge Knapper. The cost was $22,000. During the remodeling of the church, services were held in the Community Hall. Also, in 1953, a Wurlitzer electronic organ was installed.

As a side note ~ if anyone has pictures of the interior of our church (pre-1952ish) we would love to            borrow them and make copies!  We only have a few and they don't show the church too well! 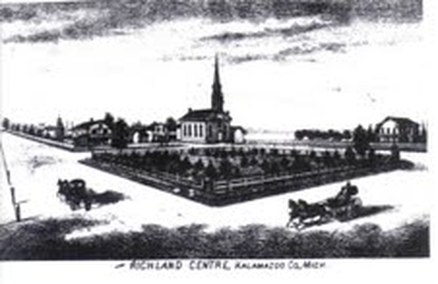